“Dear specialists, dear teachers and dear friends, hello everyone!” The tall foreign professor before us bows low to the audience, delivering his opening speech with a “Chinese flavor” expertly. It’s obvious that he knows a lot about Chinese greetings.

This man, evaluated by Chinese scholars as “gentle like spring wind with the feeling of a noble gentleman,” who has translated traditional Chinese classics like "The Analects" and "The Art of War", and has been awarded the “Confucius Culture Prize” at the World Confucian Conference, is the renowned American sinologist Roger T. Ames. 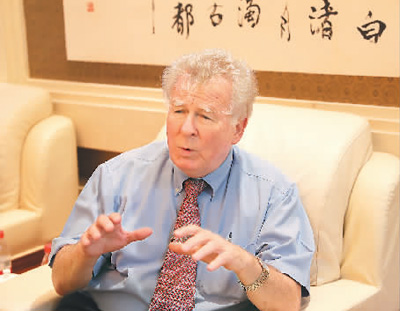 52 years ago, on a hot, wet night during the summer of 1966, 19-year-old Roger came to the Chinese University of Hong Kong alone as an exchange student. Speaking of his first night in China, he still remembers everything outside being so strange and new to him when he looked out the hotel window. He realized then that his life “began an irreversible turn.”

Not long after his enrollment, his roommate gave him an English version of The Four Books. This was the first time Roger came to know about Confucius, and he was captivated immediately. Years later, looking back on this meaningful moment, Roger smiled and said, “this was the starting point when I decided to study Chinese philosophy for my whole life.”

A new attempt to translate China

Roger remembers back to around 1978 when he was accompanying his wife to the doctors in Canada, the doctor casually asked him about his research. Upon hearing that his research area was Chinese philosophy, the doctor astonishingly “laughed with tears”. This provoked Roger to change the stubborn prejudice rooted in the traditions of western philosophy. “If western philosophy repels traditions of other philosophies, then it as a subject doesn’t fulfill its academic responsibilities.” Roger said firmly.

He knew deeply that a great misreading of Chinese philosophy existed in western academic circles. Works like "The Analects", "Mencius" and "Tao Te Ching" were originally translated and explained by missionaries, which “contained assumptions from European Christian culture.” Therefore, he started his project of retranslating classics and pushed them forward step by step. From 1993 to 2009, he translated with collaborators, year on year translating classics of Chinese philosophy including "The Art of War", "The Analects", "The Doctrine of the Mean", "Tao Te Ching" and "Huainanzi".

“They all want to learn about China”

Over 30 years have now passed since he first came to Chinese mainland in 1985. With its economic powers becoming stronger, China has played an increasingly important role in the world, and studies in Chinese philosophy have become gradually known by the western mainstream. “Now people all want to learn about China.” Looking back at the situation in the University of Hawaii 40 years ago, Roger sighed, “At that time, it was very difficult for us who learnt Chinese philosophy, including my students, to find a suitable job.” Now he writes recommendation letters for his students every year. There are always over 10 positions that need people. “It’s quite a big change.”

Next：Translating China: some of the most important philosophical works of Chinese thinkers into English